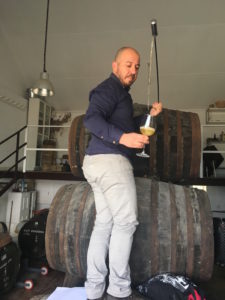 First time with Ramiro and we all realised that all we previously learnt about sherry wasn’t close to all there is to know.
Before 2012 Ramiro worked for the big bodegas, and made fortified sherrys in what’s todays ‘normal’ style.
But, he’s always been very interested in history-and during the years at the other bodegas he collected knowledge about how it used to be, before the English’s custom of fortification.

So, here’s a small history lesson about stuff you don’t learn in sommelier school:
At the time before phylloxera, there were 43 different indigenous grape varieties grown here, of which we see very few of in this more or less polyculture of Palomino Fino/Listan Blanco land.
Another thing that isn’t widely known is that before 1784 it was illegal to mature and store wines in the region (reason a bit unclear) so the wines where shipped over to England in barrels while still fermenting.
Before 1830 there were more or less only sweet wines produced in the Jerez region. The biggest market for these wines where the English people. The taste of the English population changed during the 1830:s and 1840:s and they started to demand dry wines, and the farmers/winemakers of Jerez adapted.

There was a big crise in late 1800 that led to overproduction of wine, which later led to the solution of this problem to lower the prices, and increased quantities of lower quality wines (what we can call a bad spiral hard to stop..). High volumes of low quality wines that didn’t get sold led to a trend of fortification, to ensure the wines would last even though if they got sold much later.

So between 1830 to the beginning of 1900, the people in the region had been making dry, unfortified wines in the oxidative or ‘biological way’(what they call it when the wines are aged under flor and gets protection from oxidation), so the fortified style of sherry we see today is a fairly new thing.

Next big crise came 1970, and that really changed the size of the bodegas, where more or less all the small bodegas got bought up by the bigger bodegas. There where around 170 bodegas in Sanlúcar before that, today you find around 40.
So, back to 2012: Ramiro felt he needed to try this old, traditional style of making wines out, and started his small winery.

This winery is situated right on the beach of the Qualadivir river that connects Sanlúcar de Barrameda with the ocean.
He is making single vineyard wines from a handful of the 18 excisting ‘pagos’ of Sanlúcar (pago=the Spanish name for single vineyard, divided according to their soil and exposition).

The main variety he’s using is Listan Blanc/Palomino Fino, but also have some old vines of Uva Rey and Perruno, 2 of the other old indigenous varieties you could find here before phylloxera.
Listan Blanco is the old clone of Palomino Fino, that’s also often seen planted in the Canary Islands, but actually origins from here. The ships passed here on their way out to the islands and they brought vines with them to plant back in the days.
So, the taste: whites: elegant, salty, fruity, mineral and fresh, with or without oxidative notes. Like a mix between the best Listan Blanco’s I’ve tried from the canary island and refined, oxidative wines from the Jura. Exciting is the least to say, and soon to be found in Sweden.