Fernando Angulo, who always have loved wines, was previous a wine dealer in Ronda. He imported fantastic wines from mainly France, and sold to restaurants in the region. From drinking quite a bit of these wines, he learned how he wanted to make his wines. 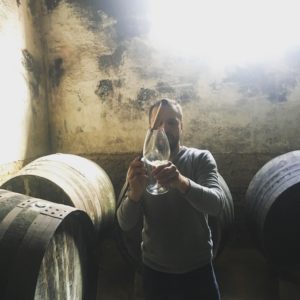 He is totally self-learned, and makes a lot of experiments and reads tons of wine books to always improve. He also introduced Carmen Cabellero to this magical world when they met. This couple is dedicated to make dry sparkling and still, unfortified wines in this kingdom of Sherry. They have selected the best ’Pagos’ they could find with old vines of Listan Blanco, and has today 2,5 ha. (Pago=classified vineyards, burgundy-style) The goal is to show what expressions you can get out of the different ’terroirs’ they work with, both in still and sparkling wines.
Listan Blanco is the old clone of Palomino Fino, that’s also often seen planted in the Canay Islands, but actually origins from here. The ships passed here on their way out to the islands and they brought vines with them to plant back in the days way before Facebook and instagram.. 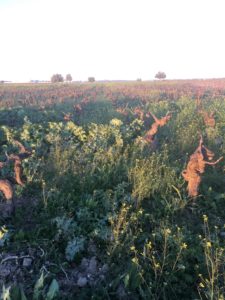 They also got a tiny parcel of Tempranillo which they make some red wine from. Their winery is right in the heart of Sanlúcar de Barrameda, that are mostly known as the capital of Manzanilla sherry and lovely seafood and are situated right at the coast. They have always been making ’natural wines’, ”the reason is in the glass”, they don’t want to fuck up the sense of place you get in the wine from the different Pagos with adding other stuff not grown there. 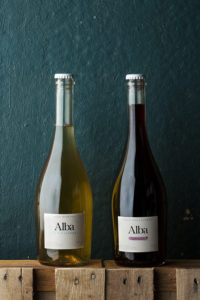 So, the taste: whites: salty, fruity, mineral and fresh, close to the best Listan Blanco from Tenerife. Also reminiscent of some white wines from the best producers of the one-horse-town Calce, in Roussillon, France. The Tempranillo is a fruity ’vin de soif’ that you without problems can drink loads of.

Vinification: Direct press then fermented and aged in an old 300-liter Manzanilla barrel. Bottled in April 2016. There were 500 bottles produced.

Vinification: Direct press then fermented and aged in one old Manzanilla barrel. Bottled in October 2016. There were 500 bottles produced.

Vinification: Whole cluster fermentation for 1 week then 1 careful pigeage and 3 more days of maceration before press aging in stainless steel tank. Bottled in April 2016. There were 400 bottles produces.