A couple of weeks ago we visited Mr Vermouth – Mauro Vergano in Asti. He showed us around in his least to say tiny production rooms where he makes his 4 different Vermouths: Bianco, Americano, Nebbiolo Chinato and Lulí (the white Chinato which he is the only one who makes) . We smelled loads of different spices and herbs and learned about everything from the difference between wormwood-species, drying technics for his citruses and what ingredients he carefully picks himself around northern Italy after seasons. He also showed us his small pots where he does the infusions. It’s a science to make the maceration of different spices, herbs and fruits for certain amounts of time dependent on their caractheristics and of course what you want to achive with the end result.

But Mauro has it all under controll and have as far as I tasted been a head of this game ever since he started now a few years ago. The production is tiny, and we always think ask for too much.. but he agreed to send us 90 bottles of each vermouth and we are very greatful and happy for that.
Thank you Mauro! 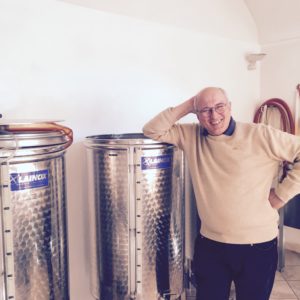