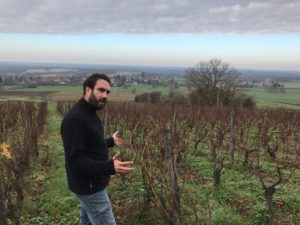 Few places is so beautiful as Jura and luckily this region is also home to a lot of very talented winemakers, therefore one more reason to go. The first stop this time was at Géraud and Paulines place (Domaine des Marnes Blanches) in Sainte-Agnes, south part of Jura, next to Rotallier. 2016 is now their 8:th vintage made and fortunately for them they have both good volumes and great quality-which seems to be the general case in Jura. The wines of 2016 so far speaks the same: beautiful fruit, more elegant and refined then the previous 2015 and with very fine aromatics. They make a big porportion of ’ouillé’-topped up wines, but also some ’sous voile’ -the traditional Jura style of ageing under flor. The flor they get here is very thin and gives a light touch to the wines, that always are on a fruity, fresh side when it comes to the style of these kind of wines. 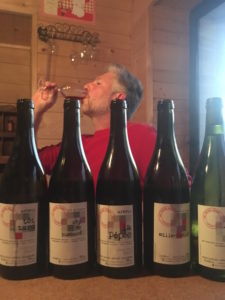 Next stop, Jean-Baptiste Menigoz, 45 kilometers north, just outside Arbois in the a horse village of Abergement le Petit. Since last year he makes his wines at Domaine des Bottes Rouges together with Florien that started her winemaking career some years ago in Beaujolais, at Yves Metras.  2016 is the 4:th vintage for Jean-Baptiste-also here with nice volumes and the taste promising a bright future. Since Florien is here now, Jean-Baptiste have expanded the vineyards, from the previous 5 ha, there are now 7 ha spread out on various places around Arbois. In 2012 he made 2 wines, and 2016 it looks there will be 12 in total. A lot of small cuvées and interesting experiments going on here. We also tried the 2015 in bottle that’s just been released and they are rich in fruit with nice balanced acidity. The reds are elegant for being this vintage, with high drinkability. They only make ’ouillé’ wines, except for one Vin Jaune in progress. All wines goes really well with cheese fondue, that’s a thing Jean-Baptiste takes great pride in making. Why don’t we eat that more often!? 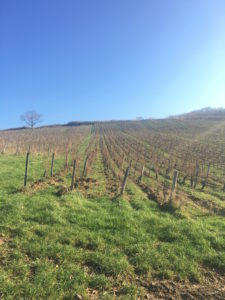 Next day started with a tasting at Fabrice Dodane, just a few kilometres away from Menigoz in the village Mathenay. He started Domaine de Saint Pierre in 2000 and has now 5 ha, where he makes mainly whites from but also have a tiny amount of Ploussard and Pinot Noir. He converted his vineyards to organic farming 2002, and has been working with a natural approach for the vinification since 2012. He makes both ’ouille’ and ’sous voile’ wines. His vineyards sits on the beautiful slopes of the hill just behind his village. The 2016 reds on barrels was hard to try at this stage, some reduction going on. The whites intense in fruit, fresh with salty mineral finish. The 2015 whites on bottle are flirty, fresh and mineral. Really looking forward to recieve our allocation of t his ’Chapon’ , ’Chateau Renard’ and ’Les Brulées’ Chardonnays, together with ’Autrement’ Savagnin. This will be here January 2017! 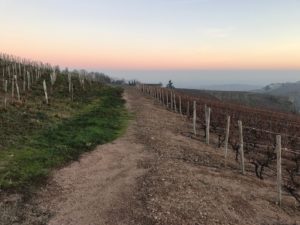 After Mathenay we drove south west, to Saint-Étienne-des-Oullières, Brouilly to meet up with Remi Dufaitre. We took a tour to one of their vineyards on the high parts of Brouilly. Here you clearly see the difference between their organic and their neighbors non-organic vineyards.. and people wonder why we choose to work organic.. Anyhow, slowly more vineyards will be organic but this progress in Beaujolais is not very fast. Back in the vinery, both Premices, Brouilly and Côte Brouilly tastes great already. All of them more perfumed and lighter then 2015, but with nice, intense fruit and fine acidity. Remi and Laurence was blessed with even bigger volumes compared with what they got in 2015, so they are really pleased. The rest of the world is too, we will need a lot of 2016, it goes down quick! They didn’t make any Juliénas 2016 though, to much problems with the weather that left them with no grapes at all, so we need to wait for 2017 to be able to drink some of that.