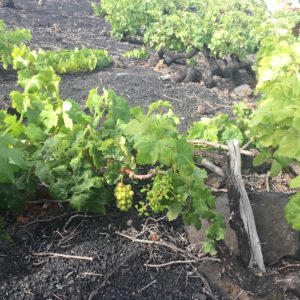 This year, no doubt one of the worst years for a very long time.. France seems to be worst hit, but the rest of Europe also suffers from difficulties that often occurs in a vintage after a winter that never got cold, like this one. Just been travelling through some parts of France and Spain, and it looks like this, according to the guys I’ve met: Roussillon, not bad, will be a good and pretty normal vintage with a good crop, Languedoc, Provence and Southern Rhône the same. Northern Rhône, a cold spring with no sun and a lot of rain has caused a lot of mildew, so the producers have had full time work with spraying sulphur to get rid of the fungus and will have around 30-40% less grapes then normal. Although the quality seems to be good, because finally the warmth and sun came back. Harvest will probably be later then normal. Beaujolais, in general same thing as Northern Rhône, although some parts of Fleurie and Chiroubles was hit by heavy hail the second week of June and in some vineyards, there are 100% loss, Gilles Paris lost all his Chiroubles, and Jean-Louis Dutraive his Fleurie. South parts of Burgundy, Alsace, Champagne and Jura seems to be at the same stage as northern Rhône from what I’ve heard.

Loire, man that’s really bad, first frost n May, then hail a few weeks later, then a lot of rain which is causing mildew. In the central parts of Loire many of the producers losta round 80%. In muscadet they where saved from the frost and hail, but was more hit by the rain and mildew, so they will have around 40-60% of the normal crop. The growers in northern Burgundy was nearly hit as badly as the Loire ones.

Bordeaux was almost a swimmingpool when we visited in the third week oh June, but are now recovering after some warm weather and massive treatments against mildew.

Pènedes also had problems with mildew, but are recovering. On La Palma the hot winter caused a lot of mildew and oidium from a lot of humidit. Also there were problems with to early budding(before pruning was finished) which now leads to an un homogenous ripeness and un balanced plants that are focusing on growth instead of grapes, there will probably a loss of 50% in the vineyards of Victoria Torres. Already now she has some vines with one bunch that is already fully ripe, and another that’s just been starting to grow.

Germany and Italy will also have reduced crops due to cold spring with lots of rain causing mildew, but the fruit seems to be of good quality. The havest will probably be a bit later then normal every where.

Sad story this 2016, we hope that it will be a long time until we see this again. So, what can we, importers and consumers do to help: drink more wine of course!! And, don’t be a stranger for buying a lot of 2016 Vin de France from Loire and Burgundy, made of grapes not normally seen in these regions!